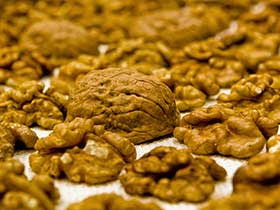 In addition, endothelial function and total and low-density lipoprotein (LDL) cholesterol improved from baseline with the walnut diet of about 56 g of walnuts per day -- about a handful -- though these measures didn't significantly vary when the two arms were directly compared, according to lead author David Katz, MD, at the Yale University School of Medicine.

They published their findings in BMJ Open Diabetes Research & Care on Monday.

"Walnuts are uniquely nutritious, so they likely confer benefits that other nuts do not," said Katz in an email to MedPage Today, though he added that research is limited. "In general, nut consumption has been associated with health benefit, including reduction in all-cause mortality, but few nuts have been studied in isolation -- mostly walnuts and almonds, and to a lesser extent, pistachios."

The walnut diets also had no significant effect on blood pressure or fasting blood glucose.

"Compared with most other nuts, walnuts have a higher content of polyunsaturated fatty acids," wrote the authors. The benefits vary, according to previous research, from improved semen quality to better cardiovascular health.

But walnuts also have a high energy density, so there's the possibility that it contributes to a positive energy balance and to weight gain, wrote Katz and colleagues, though there was no evidence for that in this study.

The Nurses Health Study has found that increased nut consumption is associated with a lower risk of type 2 diabetes, but the authors of the present study found no evidence of an increased insulin response or a decrease in HbA1c levels. "This may relate to variations in study populations, study duration, or the treatment dose, among other potential explanations," wrote the authors.

There were no caloric restrictions on participants' diets aside from the walnuts provided each week. Thirty-one of the participants were men and all were recruited in Connecticut via flyers and newspaper advertisements. Ages ranged from 25 to 75, and all were nonsmokers with a high risk of diabetes as determined by waist circumference, fasting blood glucose, or metabolic syndrome.

Exclusion criteria included those who were allergic to walnuts or other nuts, those with a current eating disorder, those with restricted diets by their own choice, those receiving pharmacotherapy for obesity, those on supplements like fish or flaxseed oil, and those with diabetes or certain cardiovascular complications. Fifteen participants did not complete the study.

In between the walnut stage and the no-walnut stage, participants had a 3 month washout phase. A dietitian customized diets to make room for walnuts in the diet, but participants were given freedom to determine how they consumed the walnuts, wrote the authors.

The Healthy Eating Index is based on the 2010 Dietary Guidelines for Americans and is used to look at how effective a nutritional intervention is.

Limitations of the study include the fact that most participants were white women, so the results may not be generalizable. The study was powered for the primary outcome, the Healthy Eating Index, and may have been underpowered for other reported measures. It relied on self-report of dietary intake -- which other studies have shown to be severely limited -- and participants were not given a restricted diet.

"Further investigation is warranted in a more diverse population to replicate these findings," concluded the authors.

Katz disclosed compensation from the California Walnut Commission for a public speech.

Posted by Dr Portnay at 6:41 PM No comments:

Why Heart Failure Patients Often Get Too Little Exercise – WebMD

Supervised aerobic workouts benefit people with heart failure. But a lack of social support and barriers -- such as child care -- means that many patients don't get the recommended amount of exercise, researchers found.

They looked at more than 2,200 heart failure patients enrolled in a 36-session supervised exercise program for three months, followed by two years of home exercise.

Participants also answered questions that measured their perception of social support and assessed potential barriers, such as finances and weather, that could interfere with participation in an exercise program.

The study was published Nov. 17 in the journal Circulation: Heart Failure.

"Patients, family members, and healthcare providers should work together to find solutions to the barriers preventing a patient from participating in structured exercise programs, because exercise programs can help patients manage their condition," lead author Dr. Lauren Cooper, a fellow in cardiovascular diseases at the Duke University School of Medicine, said in a journal news release.

Heart failure means the heart isn't pumping blood as well as it should, causing fluid to build up in the body.

Previous research found that heart failure patients who did moderate exercise had a lower risk of being hospitalized for heart failure or of dying from heart disease.

"Competing responsibilities and lack of support may prevent patients with heart failure from participating in exercise programs," Cooper said. "Assessing a patient's social support system and barriers that may interfere with their exercise program may help medical professionals to customize exercise programs that better fit individual patient"

Posted by Dr Portnay at 5:08 AM No comments:

Children of Stressed Parents May Be Obesity-Prone

Children of Stressed Parents May Be Obesity-Prone

WEDNESDAY, Nov. 4, 2015 (HealthDay News) -- Hispanic children are more likely to be obese if their parents have high levels of stress, a new study suggests.

Researchers compared obesity rates of Hispanic children in Chicago, Miami, New York City and San Diego with their parents' levels of stress at home and at work.

After adjusting for other factors such as age, gender, place of birth and neighborhood, the researchers concluded that parents with three or more chronic sources of stress were twice as likely to have obese children than those with no stress.

The findings are to be presented Friday at the Obesity Society's annual meeting in Los Angeles. Research presented at meetings is typically considered preliminary because it's not subject to the same level of scrutiny as studies published in journals.

"Obesity and chronic stress were both prevalent among this Latino population, with more than one-quarter (28 percent) of children ages 8 to 16 with obesity, and nearly one-third (29 percent) of their parents reporting high levels of stress," study leader Carmen Isasi said in a society news release. Isasi is an associate professor of epidemiology and population health at Albert Einstein College of Medicine in New York City.

Isasi said the study, one of the first to identify parental stress as a risk factor for child obesity among Hispanics, adds to the understanding of family influences on youngsters' weight.

"This research should encourage clinicians and health care practitioners to consider high stress levels as a warning sign for developing obesity not only in the adult patient, but also in the patient's entire family," Dr. Margarita Teran-Garcia, At-Large Mexico Council member for the Obesity Society, said in the news release.

The findings suggest "that special attention should be paid to adult patients who report experiencing high stress levels in this population, and providers are encouraged to consider behavioral counseling as one measure for obesity prevention and treatments," Teran-Garcia added.

Further research is needed to determine how parental stress increases a child's risk of obesity, to identify preventive measures, and to examine this link in other racial/ethnic groups, the researchers said.

Posted by Dr Portnay at 7:10 PM No comments: