From The New York Times:

The drugs are aimed at people who have a higher than normal risk for clotting or stroke, like patients undergoing hip replacement surgery or those with an irregular heartbeat. ...

Posted by Dr Portnay at 9:54 AM No comments:

If in the neighborhood -- COME JOIN ME 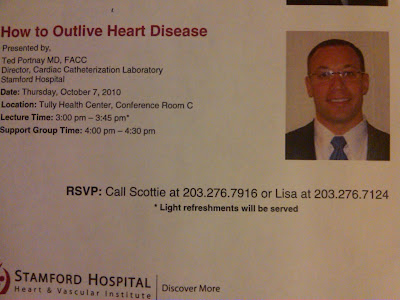 What you eat when you're young can make a big difference in how healthy your heart is later.

Researchers say too much cholesterol isn't safe -- at any age.

And a recent study suggests it really does matter what you eat and how much you exercise in your 20s and 30s.

How come? A heart-healthy diet and regular exercise can lower LDL, or "bad" cholesterol. That's the stuff that can really clog up arteries that feed the heart.  And, it turns out, the clogging process starts early.

So it's never too soon to start being nicer to your heart. Seems obvious, right? But researchers say the medical community hasn't fully appreciated the consequences of high cholesterol during young adulthood.

Now, though, a study in the Annals of Internal Medicine sheds some interesting light on how plaques build up.

Researchers found individuals who had moderate or high levels of bad cholesterol or lower levels of HDL, the good cholesterol, as young adults were more likely to develop spots of calcium in plaques of their coronary arteries. Those calcium deposits can be seen by a CT scanner and are a marker for heart disease.

The study began in 1985 and involved healthy, young men and women in their 20s. Researchers followed the nearly 3,300 people for two decades.  Researchers measured cholesterol levels and triglycerides (blood fat) over the 20 years.

The work was funded by the National Heart, Lung and Blood Institute. [Copyright 2010 National Public Radio]

If you want an idea of how long you'll live, take a good hard look at your waistline the next time you're in front of a mirror.

Researchers from the American Cancer Society say people with large waists have twice the risk of death compared to those with small waists. The researchers defined large waists as more than 47 inches for men and greater than 42 inches for the ladies.

The results held up even for those who had a normal weight for their height. The findings were just published online by the Archives of Internal Medicine.

Previous research has shown that fat in the abdomen doubled a person's risk of death from many causes, including cancer, stroke and heart disease. A big waistline is a better indicator of health risks than body mass index (BMI), the usual measure for obesity, according to some research.

The recent study followed thousands of men and women for nine years, but had a few shortcomings. All of the people were 50 or older, and nearly all were white.

Jacobs says there's no reason to expect radically different results in other ethnicities and that researchers have shown similar results in younger people. His advice: "Watch your waist as well as your weight." [Copyright 2010 National Public Radio]

What Contributes to High Blood Pressure

Posted by Dr Portnay at 9:48 AM No comments: